As measured by the TIOBE index, Python was the most popular programming language used worldwide in June 2022, with a 12.2% share. Python is popular because it's easy to learn, has excellent libraries, and hits a sweet-spot of performance and flexibility that appeals to developers, data scientists and analysts alike. This flexibility also makes Python a robust and popular choice when creating a cron job.

Before going further we should define what, exactly, is a cron a job. By the classic definition, a cron job is a command on a Linux or Unix server that's run on a user-defined schedule using the system-level cron scheduler. This is still true today, and now nearly 50 years old, cron schedulers worldwide are running more jobs than ever before. But it's also true that here in 2022 the definition of cron job has expanded quite a bit, and generally means something running in the background at a scheduled time.

Most of the time, but not always, a defining characteristic of a cron job is the infamous cron schedule syntax, a terse format to define almost any kind of schedule that looks sort of like a regular expression. These schedules, like 5 4 * * * are hard enough to read and write that 400,000 visitors use Crontab Guru every month to decipher them into plain english.

Capture the status, metrics & logs from every job

How to create a cron job with Python

This guide will introduce a few of the most popular ways to create cron jobs with Python, but it is by no means an exhaustive list. There are many libraries and platforms for running jobs, but here we will cover:

Running a Python script as a cron job

Before you can schedule your python code to run as a cron job, you need to have it organized as a script that you can run from the command line. If your code exists inside something like a Django view or FastAPI path, you will need to do some refactoring to move code into a shared module that can be used by your framework and invoked directly in a Python script.

If you are running your code as a command line script for the first time, there are usually a few things that every script needs.

With script in hand, the first thing you should do is run it yourself from the command line to ensure that it runs successfully and writes the output logs that you will want to see from your job.

Finally, it's time to register your script with the cron daemon that is running on your machine. There are multiple ways to schedule cron jobs but this guide will focus on two simple options. The method you choose should depend on whether or not you have root access on the linux machine.

With your script written, tested and scheduled you are almost done. You would think that a script that works for you will also work when run as a cron job, but there are a few key differences between your shell and the cron execution environment and these differences can often cause headaches when scheduling jobs

By following these best practices and with a small amount luck, you will hopefully see that your cron job runs precisely at it's scheduled time and finishes successfully. If you are not so lucky, we have a comprehensive troubleshooting guide for cron jobs that will walk you step-by-step through the reasons that cause most cron job failures.

Running a cron job using Celery with the beat scheduler.

Celery is a popular Python library for running background tasks with asynchronous task queues that trigger commands in a separate worker process. The most common use case is to add jobs to a celery task queue from your application code when a user does things like ask for a password reset email. When you use the celery-beat package, you can also add scheduled jobs alongside these event-driven tasks. Note: This guide assumes that you are already running Celery in your app.

First, locate your Celery initialization code and add a task for your new cron job. This is usually in a file called tasks.py:

Define a beat schedule that will be read by Celery on start-up:

The idea behind a cloud scheduler is simple: You provide a schedule and a URL to an endpoint in your web application, and the service will load your endpoint at the appropriate times, often with nice features like retries and output capture. Major cloud vendors offer schedulers, for example the Google Cloud Scheduler offered by GCP, and there are a number of other SaaS services for scheduling and running jobs, including the popular free service Cron-Job.org

Here's a look at the configuration form for a new scheduled job using Cloud Scheduler. Beyond common fields like name and description, you are left with the same configuration options as you find with Linux or Celery cron jobs: A Frequency field for the cron schedule, a Timezone selector used when evaluating your schedule, and finally a Target that specifies the web URL to trigger. 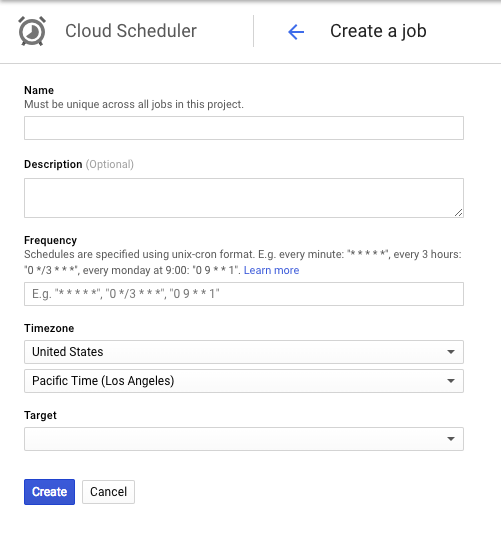 The advantage of using a 3rd party scheduler is that you can add a cron job to your application simply by adding a new endpoint and scheduling its URL for execution. This is a popular method for getting started with cron jobs, but there are a few concerns with this approach that could result in unreliable cron job execution:

The 5 places cron jobs are saved

Where cron logs are stored on your server